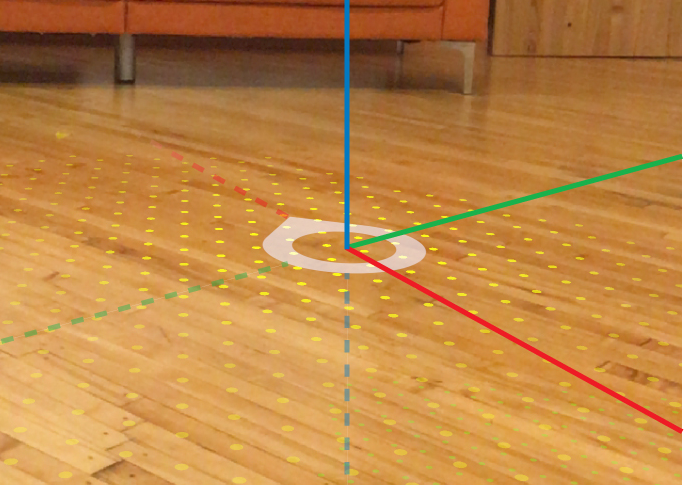 Your First Design Decision on Every Torch Project

The project anchor, the ephemeral virtual marker that affixes your project’s origin point to a plane, is a frequently overlooked but important part of any Torch project. Setting your project anchor is, in fact, the first design decision you make when building a prototype and should be treated as such.

You can use the project anchor point to calculate precise object placements, animations, and transitions. The anchor allows you to collaborate with other designers in real-time around a shared view of the project. And most importantly, where you set your project anchor shapes how your end-user ultimately interacts with environment itself — how much they must move, where their gaze is drawn, what obstacles they must avoid.

So much depends on the anchor’s placement so it is worth taking a moment to understand the function this seemingly simple interaction really serves.

The project anchor establishes the origin point of your design, the point where the X (left/right), Y (up/down), and Z (forward/backward) coordinates all equal zero. Every object you place - be it a 3D model or a 2D image - is placed relative to this origin.

What do negative and positive values mean? Remember when you first opened the app and started scanning for surface planes? The project anchor is fixed to whichever of the horizontal surfaces you selected. This plane establishes the X and Z coordinate space. The Y axis is 90 degrees relative to this plane. And importantly, all values are expressed in meters. The direction of the anchor arrow establishes the orientation of the X and Z axes.

Say you set an anchor in the middle of your floor some small distance from you with the arrow facing directly away (how far matters less than the arrow orientation in this example). An object with position values of -1.5, 1.0, 0.5 is 1.5 meters to your right (the X axis), 1 meter above the surface plane (the Y axis), and half a meter toward you (the Z axis), relative to the point of origin.

If you are new to 3D and used to design for only the X and Y axis, or are interested in a deeper consideration of what the addition of the Z axis means to design, check out my post 3D Primer for Screen Designers.

Setting, Adjusting, and Resetting the Anchor

When you are first setting your anchor point, Torch will project the anchor point to the nearest detected plane your device is facing.  You can reset the anchor point at any time by tapping the Project Settings icon in the Design Environment or going to the Main Menu, and tapping Reset Project Anchor.

You can also drag the anchor to a new position on the horizontal plane using a single finger drag and change its orientation using a two-finger twist gestures.

Design Considerations for Your Anchor

Take care when setting your anchor point. Ask yourself how much movement your prototype requires of users. How dispersed are the objects in your prototype going to be? Will interactions stretch out in a line across a large physical space leading away from the origin as it might in a wayfinding app, or will the main interactions take place in a relatively contained space (like this Red Bull “table-top” app) situated close to the origin?

Our blog on the wayfinding concept goes into some detail on setting the project anchor but it is important to stress that the project would not be effective without that first, critical design decision.

‍
Will your users need to turn around or twist to see parts of your design? Do you need your user to experience the prototype from a certain perspective or can they explore it from any direction?

In our fictional meditation app, Mindscape, as with the Torch AR onboarding project many of you have used, we place a 2D marker - “Stand Here” - at the origin and design around this point, both as a means of reducing the need for a huge space and to try to guarantee a uniform user experience. Consider this approach if you plan to just hand your project over to a reviewer or client and want to guide them through the immersive experience.

Ask yourself about the environment itself and its role in your design. Is your project dependent on a specific physical entity - a painting in a museum, a conference room of a specific size? Are there objects a user will need to avoid? Will their view ever be obscured?

Setting an Anchor For Multi-User Collaboration

Once you understand its function and how to manipulate it, you can use the anchor point for all sorts of useful things. For instance, you can use the project anchor to collaborate with others on the same project at the same time. Just make or identify some existing identifiable marker - we like pieces of tape cut into triangles and placed on the target surface - and have all your collaborators set the anchor (and orientation) on this marker.

This works when you and your collaborators are in the same room or separated by an ocean. As long as everyone understands the relative orientation, designing together is a snap.

The same goes for sharing projects with clients or reviewers for more interactive feedback and design sessions. If you are the kind of designer who likes involving the client in the design process, multi-user collaboration with Torch centered around a common anchor point can be high impact.

More than one of our users has wowed clients and won business by getting their clients directly involved in a live prototype. And it all started with a picking the right place to set an anchor.

The Future of Anchors in Torch

Now that you know the basics of using the anchor point in your design, you are ready for what is coming soon in Torch AR. Currently anchor placement is entirely manual and ephemeral. You place an anchor during a session and must place it again the next design session (hence our use of tape markers). We will always allow for fine manual control of anchors but we will soon be releasing scene anchors where each scene has its own anchor relative to the project anchor. This paves the way for image tracking that allows you to attach anchors to physical objects and images, and, a bit later, anchoring to vertical surfaces. The possibilities for your designs are vast and it all starts with setting the anchor point in the right spot.

Now it is time to apply your knowledge of project anchors. Download or launch Torch, set an anchor point, and start designing!